Increasing noise pollution and the loss of silence in our modern world significantly impacts people as well as the environment. Learning how to listen may be one solution.

The world is becoming increasingly loud with noise pollution. Fewer and fewer geographical areas remain free from the sounds of airplanes, cars, trains, and other modern human activities.

Recent research states that in the most protected areas within the United States— including national parks, wilderness areas, and open spaces— noise pollution is on the rise. A recent study by the National Park Service and Colorado State University shows that noise levels caused by human activity are twice as loud as natural sounds, such as wind, running water, animal noises. In 12 percent of U.S. wilderness areas, the most protected of public lands in the U.S, noise levels are twice as high, primarily due to human transportation sounds.[1] This increase in noise, according to a study published in Science Magazine, goes beyond the levels that are currently known “to interfere with human visitor experience and disrupt wildlife behavior, fitness, and community composition.”[2]

The impacts of noise are predictable, such as hearing loss and sleep disturbances, while other impacts can be surprising, such as an increase in blood pressure, cognitive delays, memory loss, and general heart health. The U.S. Environmental Protection Agency warns that noise can impact children during specific phases of development, hindering speech, language acquisition and language-related skills like reading and listening.[3] Noise also impacts the non-human world. Sound is critical to animal communication and noise pollution can interfere with the capacity to hear and transmit important information, such as avoiding danger and locating prey. Some effects include the interruption of mating rituals and the relocation of birds and animals from noisy areas, which can have far-reaching impacts throughout the ecosystem.[4]

In this virtual reality/360 film, Sanctuaries of Silence by Adam Loften and Emmanuel Vaughan-Lee, acoustic ecologist Gordon Hempton describes the impact, value, and power of silence on human beings. The film is set in the Hoh Rain Forest within Washington State’s Olympic National Park, one of the most ecologically diverse environments in the United States, as well as one of the quietest places in North America. The area is filled with the natural sounds of the temperate rainforest. The film provides an opportunity to experience the soundscape of the Hoh rainforest through Hempton’s perspective. He considers the impacts of noise pollution on humans and the natural world while sharing perceptions that illustrate the power of silence as a gateway to beauty and reflection in our noisy world.

3. Environmental Protection Agency, “Noise and Its Effects on Children .” PDF. [^]

Common Core English Language Arts. SL.11-12.1.c. Propel conversations by posing and responding to questions that probe reasoning and evidence; ensure a hearing for a full range of positions on a topic or issue; clarify, verify, or challenge ideas and conclusions; and promote divergent and creative perspectives.

College, Career, and Civic Life (C3) Framework for Social Studies. D2.Geo.6.9-12. Evaluate the impact of human settlement activities on the environmental and cultural characteristics of specific places and regions.

Next Generation Science Standards. HS-LS2-7. Design, evaluate, and refine a solution for reducing the impacts of human activities on the environment and biodiversity.

Ask students if they have heard the terms acoustic ecology or soundscape ecology. Share with students that this field of study identifies and documents sounds—natural as well as man-made sounds—to deepen our understanding of the relationship between humans and the environment.

Prepare to share with students this brief 3-minute video, Soundscape Ecology, from PBS and NOVA, which defines and describes this field of ecology.

Ask students to list three characteristics of soundscape ecology they learned from the video. (Some answers include: Soundscapes reflect the noise of an environment in a single moment of time, recorded soundscapes can monitor environmental change, soundscapes include 3 categories of sound (geophysical, biological, and human) in diverse ecosystems, areas disturbed by humans have less active and less diverse soundscapes, and listening to soundscapes over time can reveal which elements in the environment are struggling, thriving, or disappearing.)

Engaging with the Story

Explain to students that they will be viewing a film about Gordon Hempton, an acoustic ecologist and researcher who has been studying the impacts of sound and silence for 35 years. Hempton records the sounds of nature and founded One Square Inch, a non-profit research project committed to studying and preserving an area in the Hoh Rainforest of Olympic National Park on the west coast of the United States. One goal of the project, according to the organization’s website, is described in the following statement: “Our hope is that by listening to natural silence, it will help people to become true listeners to their environment, and help us protect one of the most important and endangered resources on the planet, silence.”

Ask students to watch the film while taking note of Hempton’s experience of sound and silence. Share the following questions with students prior to watching the film: How would you characterize Hempton’s relationship to silence? Why do you think Hempton values silence? What role does silence play in his life and his work?

After viewing the film, lead a discussion with questions such as:

For additional classroom discussion prompts, use the conversation cards to further engage students with the film in small groups.

Give students one of the following reflective writing prompts or activities to demonstrate their understanding of the story. (Note for teachers: Just as quotes from a book or text are used to prove an analytical thought, students use the film to justify their reasoning.) The conversation cards can also be used for reflective writing activities.

A Listening Activity: Part 1
Gordon Hempton said that sound is part of what it means to be in a place. Included below are five exercises to guide you through the exploration of place through sound and listening. For best results, turn off your phone to avoid distractions. (C3.D2.Geo.6.9-12)

A Listening Activity: Part 2
Create a sound map for each of the locations in Part 1. After each exercise, draw the sounds you heard in each area. Compare each location. Which sounds overlap? (C3.D2.Geo.6.9-12)

(Interview) Leslee Goodman, “Quiet, Please: Gordon Hempton On The Search For Silence In A Noisy World." The Sun Magazine, September 2010.

Ula Chobrak, “Noise pollution is invading even the most protected natural areas." Science, May 4, 2017.

(Interview), Krista Tippett “Silence and the Presence of Everything." On Being, December 29, 2016.

Meghan O’Rourke, “Lessons in Stillness From One of the Quietest Places on Earth." The New York Times T Magazine, November 8, 2017.

Sanctuaries of Silence
by Adam Loften and Emmanuel Vaughan-Lee 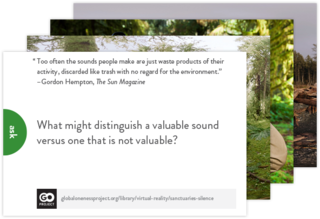 Watch our films on your phone, tablet, or connected TV.
Download on the App Store Get It on Google Play Available at Amazon Available on Roku